GarbineMuguruza blazed past Magda Linette to reach the last eight at the ongoing Wuhan Open in China. The top ranked Spaniard beat her Polish competition 6-2, 1-6, 6-4 on Wednesday to advance. Muguruza started off very well against the No. 83 Linette, using just 30 minutes to wrap up the first set in her favour.

Muguruza expected to wrap up the game in the second set but Linettestunned, fighting back to take the set by even better margin of 6-1. She won the first five games before a brief pause for the roof to be closed because of rain. Muguruza gradually fought her way back but Linette soon killed the set.
END_OF_DOCUMENT_TOKEN_TO_BE_REPLACED “Investigation of corruption allegations by law enforcement agencies takes precedence over tennis disciplinary action,” the body said in an email. “The TIU will continue to work co-operatively with [Spanish police] and offer its full support and access to resources.” END_OF_DOCUMENT_TOKEN_TO_BE_REPLACED A while back, Jankovic found herself in a situation where she had been left wondering if she was suffering from cancer because she had been told by a specialist that it might be the case as she had a tumour of abnormal size. END_OF_DOCUMENT_TOKEN_TO_BE_REPLACED 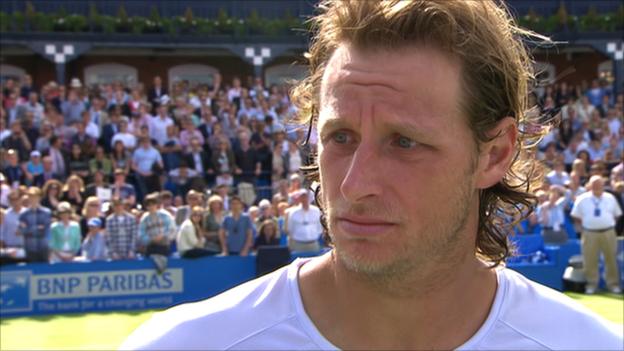 Nalbandian also decided to quit when his physical problems started to interfere with his participation in several matches. Due to such problems, he was sidelined for several tournaments. The shoulder is a crucial health component for any tennis player. When David started to have shoulder problems he decided to announce his retirement. END_OF_DOCUMENT_TOKEN_TO_BE_REPLACED

If you are nostalgic about Mardy Fish you would probably want to know how he retired from the game. The former world ranking tennis player decided to end his career when he was tackling an anxiety disorder in his personality. However, he still braved and took on the challenge to play in the US Open. His last matches were in the Flushing Meadows.

Fans would certainly want to see him leave the court and end his career in a victorious manner, but the very fact that he decided to participate in a tournament at the end was a worthy end for him. The US Open saw him playing a match on Wednesday. His career had been a successful one though he did face challenges, the last one being able to participate in the tournament in spite of his problems. The last match also saw him getting back to form, but his opponent took the chance of winning away from him. END_OF_DOCUMENT_TOKEN_TO_BE_REPLACED

The last time that Victoria Azarenka was seen taking part in a professional match was about 100 days ago. A foot injury had kept her out of the game since then, but, now, she is all set to make an appearance on the tour again. Next week, she would lock horns with Camila Giorgi of Italy in her first match in the Aegon international tennis tournament.

Azarenka has been having hits since the last couple of weeks, but, for any player no matter of what standard he/she is, match practice is very, very important. If you are going into a tournament without match practice, you are most likely to look rusty at least in your first 2-3 matches. So, the Belarusian player can’t be expected to bring out her top game straightaway. But, yes, as much time she spends out there on the court, she will only get better.

Talking to the press yesterday, Azarenka said, “As soon as I started having no pain, I decided to have light practice. I have been keen to play and I am glad that finally tomorrow is the day when I am going to be on the court again taking somebody on.”

“I have had some good practice sessions, but, as we all know that practicing and playing in the match are two different things. However, I am pretty hopeful that I would be able to do well.”

It’s just three tournaments that Azarenka has taken part in this season. Two were right at the start of the season i.e. the Brisbane International Tennis Tournament and the Australian Open, while, the third one was the BNP Paribas Open from which she got knocked out pretty early.

Azarenka’s position in the WTA rankings at the moment is no. 8.