Wimbledon finalist Eugenie Bouchard asked that Sharapova be banned for life, labelling her a cheat. In contrast the tournament director for the ASB Classic Karl Budge has said Sharapova would return for the event. END_OF_DOCUMENT_TOKEN_TO_BE_REPLACED 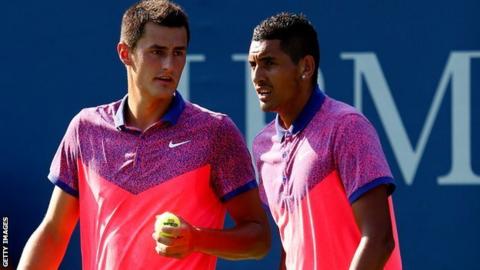 Tomic along with his compatriot Nick Kyrgios are considered to be the two bad boys of Tennis in the modern generation. Both of them have found themselves in a number of controversies in the recent times attracting a lot of criticism from all quarters. END_OF_DOCUMENT_TOKEN_TO_BE_REPLACED

Speaking to an American news network recently, Serena said, “I think you must see me practicing once. I don’t think I am that calm and relaxed. Of course, when you spend this much of time playing on the tour, you learn a lot of things one of which is how to carry yourself on and off the court. So, I don’t express myself that much during games. But, the nervousness is always there.” END_OF_DOCUMENT_TOKEN_TO_BE_REPLACED

Marin Cilic is looking to add one more to his Slam titles’ tally this year. Cilic has just had one Slam title under his belt which he had clinched the previous season, getting better of Kei Nishikori at Flushing Meadows.

Nishikori was seeded higher than Cilic in that tournament and probably, was the favourite in the lead up to the final. But, Cilic was a far better player on the day. END_OF_DOCUMENT_TOKEN_TO_BE_REPLACED